MANILA – The results of the third run of the NCR COVID-19 Online Panel Survey conducted by PUBLiCUS Asia, Inc. in partnership with Kantar show particularly high disapproval among respondents for the COVID-19 aid provided to the Philippines by China, especially when compared to perceptions on aid provided by other international allies.

37% of the 1,000 Metro Manila residents aged 18-70 interviewed between May 5-8, 2020 said they disapprove of the aid provided by China to the Philippines in its fight against COVID-19. Only 34% approve of Chinese aid while the remaining 29% neither approve nor disapprove.

“These results are consistent with the wariness or outright distrust that many Filipinos continue to voice against the Chinese government, despite the Duterte administration’s best efforts to rehabilitate the image of China in the minds of Filipinos,” said Mr. Aureli Sinsuat, PUBLiCUS Executive Director and spokesperson.

Aside from China, the five other countries tested garnered majority approval from respondents for the aid they have provided to the Philippines. Japan had the highest approval rating at 77%, followed by South Korea (73%), Taiwan (65%), the United States (61%), and the European Union (59%). 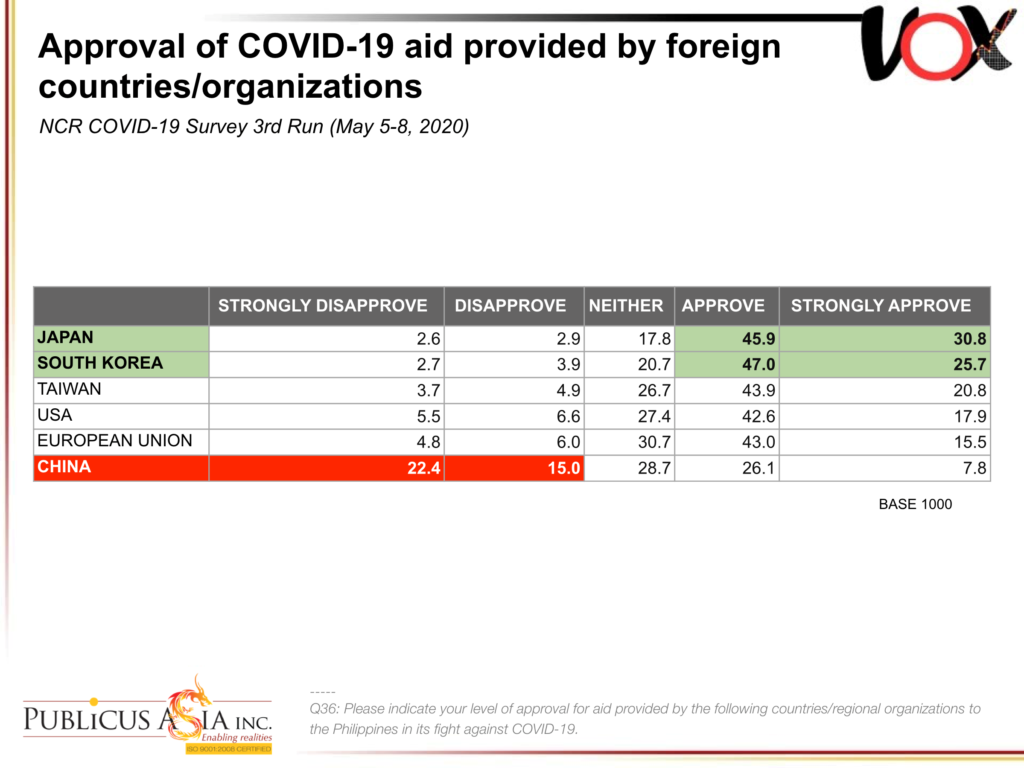 “In contrast to their views on Chinese aid, our survey respondents seem to be quite appreciative of the aid provided by our other East Asian allies. It is also possible that respondents were impressed by initial successes of Japan and SoKorea and the model set by Taiwan as one of the nations that conquered the deadly virus,” Sinsuat said.

The online fieldwork for all three runs of the survey (April 2-6; April 13-18; May 5-8) was conducted in partnership with Kantar (formerly Lightspeed Research Singapore), which provided an online panel of 1,000 Metro Manila residents aged 18-70 from its pool of 100,000 Philippine panelists. The number of respondents per city was distributed proportionally based on official population data.

Kantar is a leading firm in the global data industry with a panel reach of 88 million respondents in 90 markets worldwide according to its website.

More information on the purposive sampling methodology and panel selection process of the NCR COVID-19 Online Panel Survey can be found here.

BLOG COMMENTS POWERED BY DISQUS
back to top
COVID-19